An avid practitioner of song craft, sing-a-longs and fun-filled storytelling, Liz Teague brings a feeling of community with her music wherever she plays. Joined by members of The Blue Dragons and other friends, expect good vibes and better music

Dear Brother is a progressive bluegrass band from the hills around Asheville NC. The quartet focuses on original songwriting in the string band way. They write new songs, with new themes in the old way of three part harmony singing, fiddle tunes and a churning rhythm. Their first album release, The Hours, is available now on all digital platform. - https://www.facebook.com/DearBrotherbluegrass/

Lead singer and bass player Tom Godleski began Buncombe Turnpike in the fall of 1997. Buncombe Turnpike plays a variety of heartfelt tunes ranging from traditional and contemporary bluegrass to gospel and hand crafted Buncombe Turnpike originals. With their crowd pleasing demeanor, seasoned musicianship, and powerful vocals, the band has made a name for themselves among traditional and contemporary listeners alike. It is no surprise that their 2004 sophomore release ‘Blackwater Bottom’ made waves on the air and on the stage proving yet again that one of the premier bluegrass bands from the musical hotbed of Asheville NC. Their fifth album, "Forever It Will Be" is the first all orginal album the band has produced. - http://www.buncombeturnpike.com/

Most bands don’t take it far enough. Rock isn’t dead. Blues isn’t dead. Forget that. There will always be a sweet spot for music where Blues and Punk hit. Legitimate idea of what happens when hard mountain blues meets old school CBGBs New York punk. Nothing good happens in the deep forest. See them live. This is the real thing. They’ve sinned and done wrong and been broken and pulled themselves up to fight again. - https://www.thedirtybadgers.com/

Alarm Clock Conspiracy is an Indie Rock / Power Pop / Alt-Country band from Asheville, NC. The "conspiracy" which we speak of, is the fallacy that all humans must awake to a bellowing alarm clock each morning, only to rush off to work at a job that they truly hate. We are the spearheads of a revolution against day jobs everywhere. Wake up to right now! ACC's influences are drawn from 60's & 70's acoustic folk, and rock music, as well as more current indie rock sounds of today. ACC's focus is on high energy live performances as well as writing genuine songs that are infectious, and to the point. What sets the band apart from most acts out there is our ability to play an acoustic performance, or a full bore electric rock show. We pride ourselves on our versatility to fit to whatever situation the event calls for. - http://www.alarmclockconspiracy.com/

Singer/Songwriter Fritz Beer heads the group with his down-to-earth, spirited songs about good-hearted people who sometimes go astray. His vocals waiver somewhere between a Joe Strummer snarl and Graham Parker's soulful whine, but it's American music and that means rock, country, soul, and blues laid out in a simple, acoustic format. Montford residents Elzy Lindsey (drummer/cajon player) and bassist/vocalist Dave Baker (bassist/vocalist) come to Asheville by way way of New Orleans courtesy of Hurricane Katrina. Louisiana's loss is North Carolina’s gain. This joined-at-the-hip rhythm section draws from their punk/rock n roll roots, making bands and singers sound great for years in The Big Easy and in Asheville. Sim Hickman, the newest member shredding on lead acoustic guitar, honed his craft for decades playing 5 nights a week in jam bands from Jackson to Macon county. In this all-acoustic format with frontman Beer, their skills and raw passion for music truly shines through. - https://fritzbeermusic.com/

Throw out the rules when the Billy Jonas Band hits the stage! It's a musical conversation… a sonic celebration … a splendiferous gathering of old and young, because at a Billy Jonas Band show, the ensemble is… everyone! - http://www.billyjonas.com/

With an enlightened mixture of pop, soul, and FUNK; LYRIC awakens an undiscovered spirit within their audience. Described by many as the best band in Asheville, LYRIC delights crowds across the region. - https://www.reverbnation.com/lyricfans

WestSound was formed many years ago by three brothers: Randy, Oscar and Cecil Weston. They have performed locally and abroad. WestSound has performed in the Indiana Black Expo, Goombay, Harambee, Bele Chere, Eden Fest, LEAF and more! WestSound is quickly becoming one of WNC's hottest bands, known for their fantastic music and great energy! - https://www.facebook.com/WestSound-215017765645/

The Pond Brothers are drawing on the taproots of bluegrass and adding elements of world music to create a fresh sound self-dubbed ‘Bluegrasstafari’ in 2002. they hail from the Blue Ridge Mountains of Asheville, NC. and have been playing all around the United States and Internationally for the past twelve years. They make up a core of the groups Snake Oil Medicine Show and CX-1, and are in numerous groups across the southeast. They have shared the stage with such heros as Roy ‘Futureman’ Wooten, Joe Craven, Vassar Clements, Yonder Mountain String Band, Little Feat, Peter Rowan, Tony Rice, Baby Gramps, and Larry Keel... Powerful vocal harmonies and firey-fast finger picking. - https://www.reverbnation.com/thepondbrothers 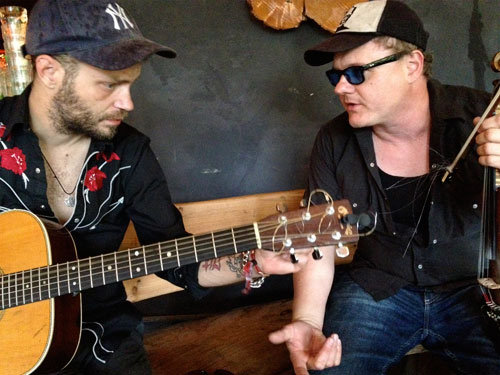 A few years back, George and Andy Pond were booked to host a weekly “bluegrass brunch” on Sundays at the One Stop Deli on College Street.  Over the years, the Pond Brothers occasionally invited friends to sit in, and some started showing up regularly, so much so that this band was born.  Never knowing exactly who’s going to be there any particular Sunday inspired the band’s name.  When everybody shows up, we call ourselves the Cat Dragons.  By “everybody,” we mean:  Montford resident Jason Krekel on fiddle and mandolin, Andy Pond on banjo, George Pond, who works in Montford, on bass, yours truly on lap-style resophonic guitar, and Aaron “Woody” Wood on guitar.  The music is pure Americana with bluegrass instruments in the various styles of Johnny Cash and John Hartford.